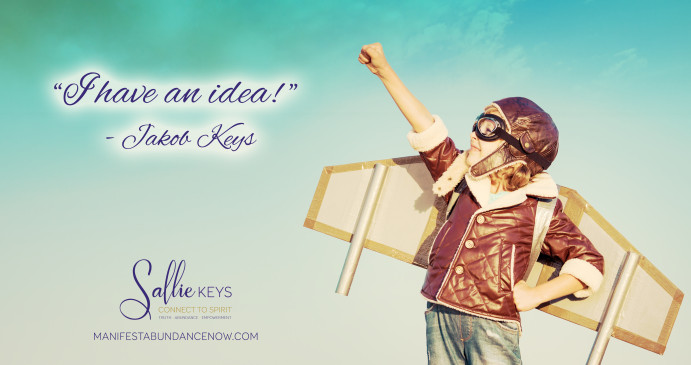 I start this article with a quote from my older son, Jakob, as he stands up on a chair and puts his finger up high in the air and says, “I have an idea!” 😀

Here’s a story that I know you Moms out there will appreciate, as well as anyone else who is genuinely interested in getting more in touch with your intuition…

I had been dealing with an extremely fussy toddler for a few weeks and couldn’t pinpoint the reason why. It was looking like he was really just tired, but he had had a ton of sleep too and it just wasn’t making sense.

He was so fussy, in fact, that I knew in my gut it was beyond what everyone wanted to blame on “terrible two’s” or that last tooth that was breaking through. “It’s just a phase” or “he needs more outside time” is what I got and one of those comments even came from a doctor as he was throwing a tantrum and screaming on the floor right in front of her…

None of this felt right to me. My “mommy gut” kicked in. (I know you Moms can relate!)

At any rate, I was working on my computer multi-tasking as I usually do, noticing that I was having some trouble focusing and felt really tired, which had not been unusual lately, except this particular time, I found it rather odd, considering I had had NINE HOURS of sleep the night before. There’s just no way I should have been that tired. I even started to wonder

No longer could I blame being tired on lack of sleep. I knew life with two boys could wear you down, but not this much. Then a thought came to me… an idea. It was the kind of thought that was really an urge … a push to DO something.

I knew it was a really a message from Spirit.

The “thought” I had told me to look up exactly what I was experiencing. As a side note, I’m a HUGE fan of using Google to find answers to random questions. I can’t even begin to tell you how many times I’ve had random search terms pop in my mind and plugged them into Google only to end up finding EXACTLY what I’m looking for.

As a result, I don’t hesitate when I get that push from Spirit.

So I plugged into Google a simple “still tired after 9 hours of sleep” and of course, articles about sleep disorders came up. But very quickly before I let myself get carried away and go completely hypochondriac (you know we’ve all been there at one time or another! LOL), I kept scanning and clicked on an article that listed the top 12 causes of fatigue – a much more common sense bet, I thought to myself.

Right there on page one of the article, anemia was listed as a cause of fatigue. Now, I’m certainly not saying either of us are anemic, but starting last year, I had been using a natural iron supplement for both myself and the boys. (Some of you natural Moms out there might be familiar with it – Floradix is an all-natural iron supplement made from herbs and Spinach leaves – great stuff!) It’s not something I used all the time, but just a small dose every so often as children’s multivitamins do not typically contain iron because of the potential for overdose.

When I saw anemia as a cause of fatigue, I remembered something – it had been months since I had used it because I thought we didn’t need it anymore.

I just knew I had my answer – to both my fatigue and my son’s super fussy behavior.

I went right to the cabinet and opened up the bottle that had been just sitting there waiting for me gave myself a dose. By the time I left to pick up the boys, I could tell my focus was coming back and everything was getting much clearer.

Later that day, I gave both boys a small dose as well. What was particularly interesting was my fussy one’s reaction – he closed his eyes and smiled with the cutest little smile after I gave it to him.

His whole demeanor changed after that. Now I’m certainly not claiming that I magically cured my toddler of teething pain or “terrible two’s,” but he chilled out tremendously. He went from screaming about wanting the vacuum (yes, my son has a fascination with vacuums! LOL) and hitting his brother to lying quietly on the floor watching a show on Sprout.

It was obviously what he needed.

Then I began to wonder if iron deficiency could cause sleep issues … another answer I’d been searching my mind for about him because he just didn’t seem like he was getting restful sleep and I was wondering if we had been all too quick to blame it on teething.

He was so calm that evening and so easy to put to sleep that I actually had the time to follow up my thought (which was really just another “AHA moment” courtesy of Spirit) with some more research on iron deficiency in toddlers and found that it can, in fact, cause sleep issues as well.

I knew I had just figured out something important and sent an email off to his pediatrician to share my thoughts and see if we should check his iron levels in a blood test.

It was probably that growth spurt or that recent stomach bug he had that drained him to the point where he needed to be supplemented with some extra iron. But whatever the reason, I was nothing short of relieved, as I know all you Moms out there can relate to, because when your child is not happy, you will not be.

But, more importantly, the big lesson here, and what I want you to take away from this story is …

FOLLOW YOUR INTUITION. LISTEN TO THE MESSAGES SPIRIT HAS FOR YOU.

Spirit is ALWAYS there, waiting to help you and guide you. Spirit WANTS to help you succeed and live a happy, healthy, abundant life.

But YOU HAVE TO LISTEN to hear the messages.

I never would have gotten the message to do that simple Google search if I hadn’t been sitting quietly working and pondering and wondering what on Earth was going on. It was the only way I could possibly have gotten the answer and I urge you to do the same.

Give yourself the time and space you need to allow Spirit to come through.

Have you tried to connect with your Spirit Guides and it just doesn’t seem to be working for you? Are you ready to get that “on demand” guidance you want and need? Check out my Spirit Guide Reading or my Connect to Spirit for Abundance Program. Email me to find out more and get started now.